Adding an HDMI port to the original Xbox

Here's a list of items that you'll need for adding an HDMI port to the original Xbox.

You may want to research other component to HDMI converters. The model I bought is cheap, and works, but you might want something better. Cheap converters can add additional latency, and not make a perfect conversion. I didn't personally notice any additional latency or color problems with the model I bought, but your mileage may vary. You probably don't need something with an upscaler either. 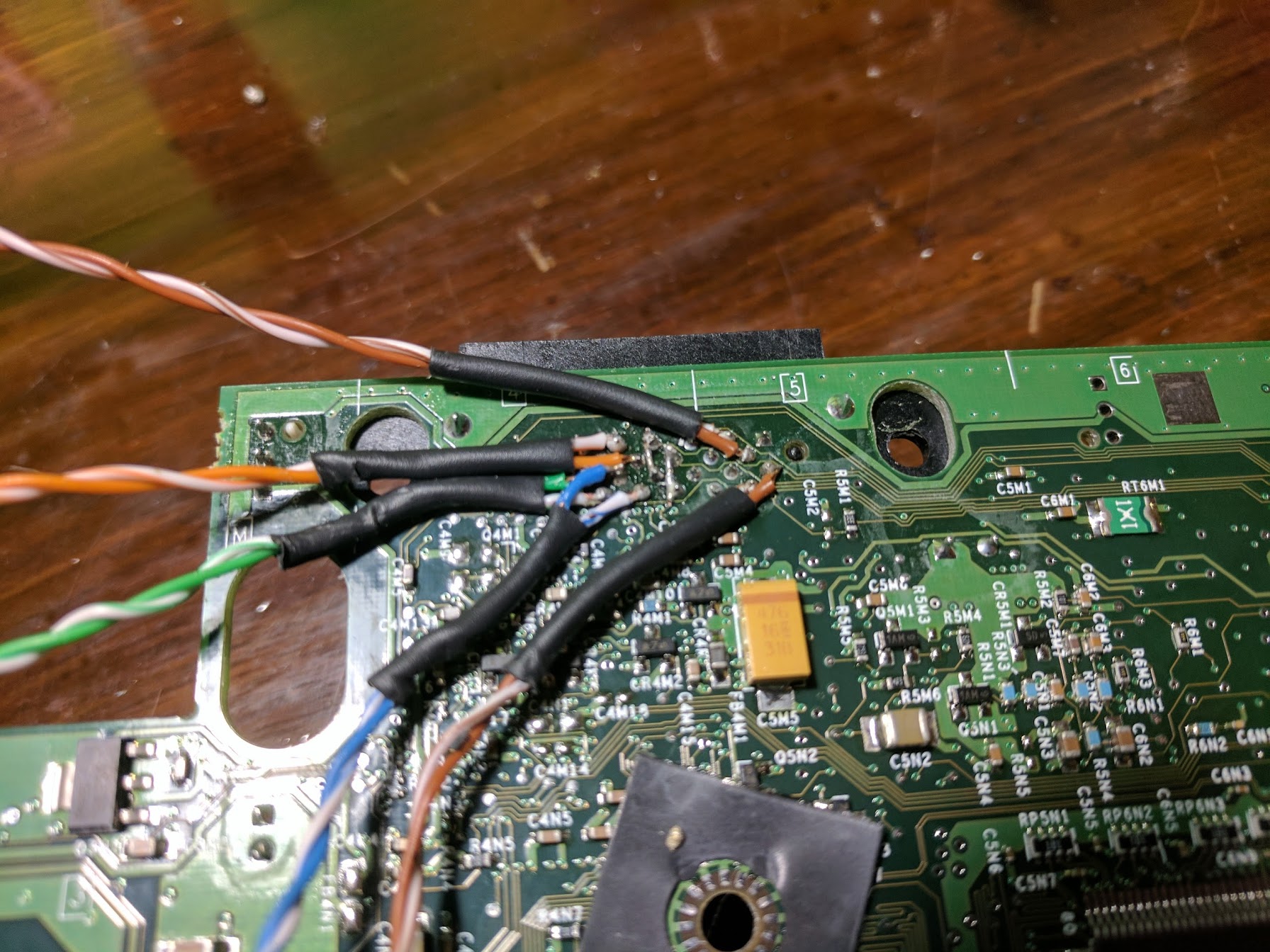 Begin by taking apart your console. You will need to completely remove the motherboard, so that you can access the solder points for the video connector underneath the board. There are guides on how to disassemble the Xbox if you haven't done this step before.

There is a set of twenty solder points right underneath the video output port on the back of the console. You will need to solder a total of ten wires to these pins. You will also need to bridge a couple pairs of pins together to set the video output mode. 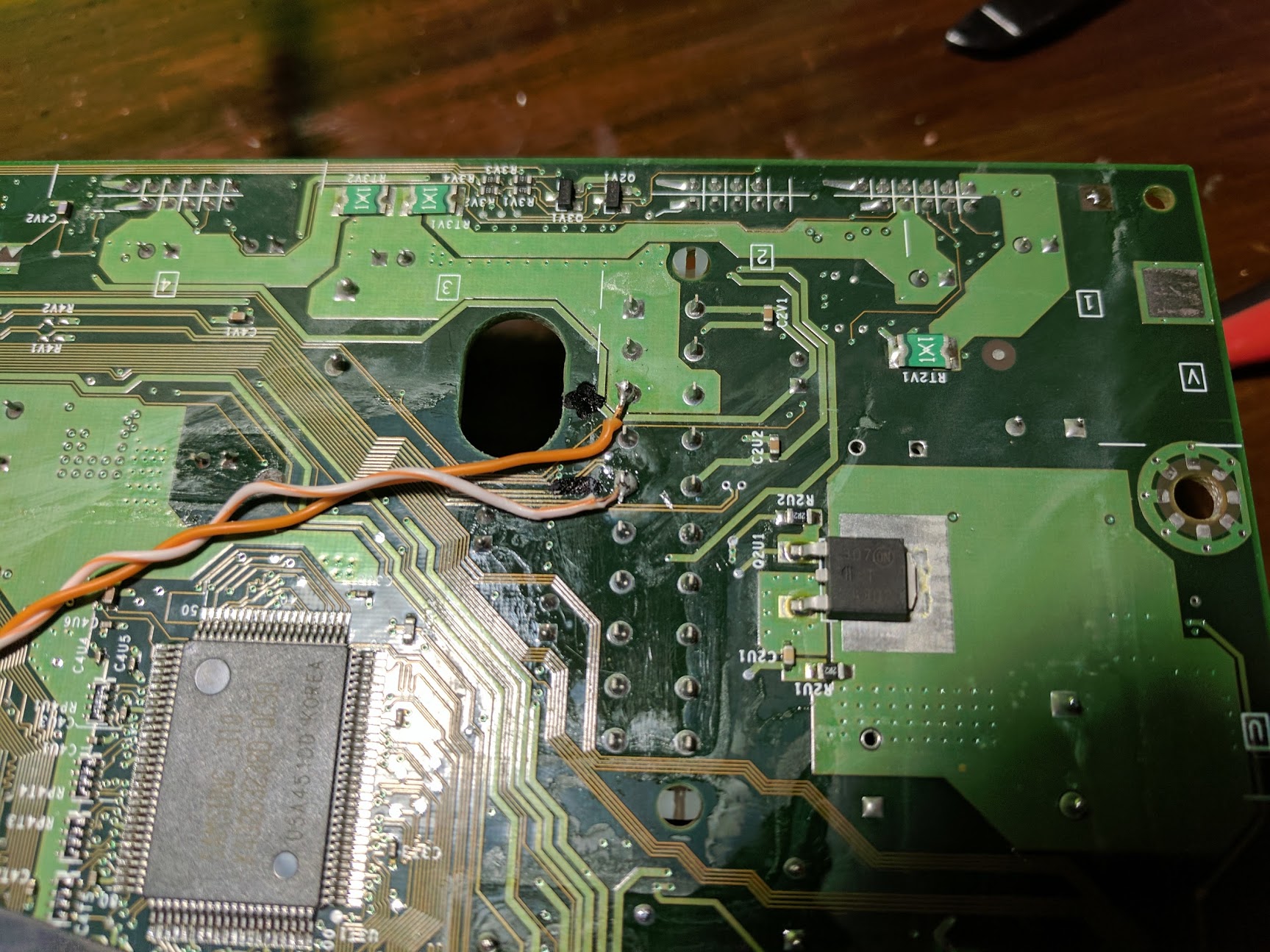 Additionally you will need to connect power wires to power the component converter. In my case I connected a pair of thicker wires to the underside of the 20-pin ATX connector. 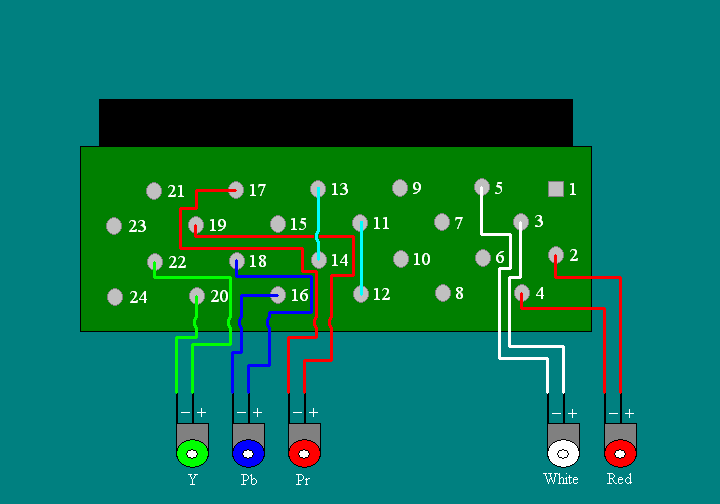 I have provided a schematic of where you should connect your wires, and then a picture of the final result. Here are some things that may be useful. 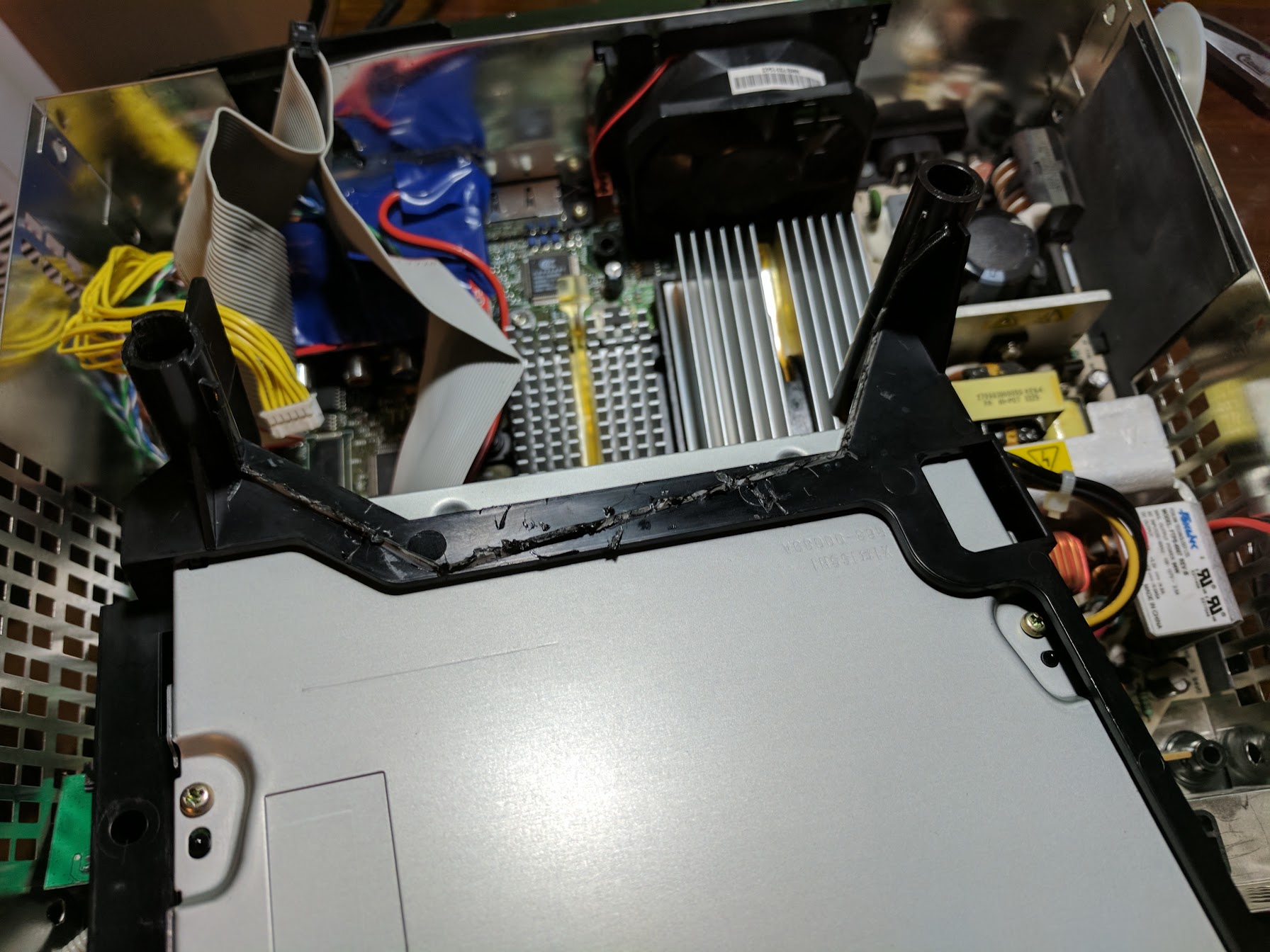 To prepare the Xbox's case you will need to cut a small HDMI sized hole in the back of the console. I made my hole right above the area in between the Ethernet and AV ports.

I also had to modify the plastic tray that the DVD drive sits on top of. This was to allow the component converter device to have more room to sit. Keep in mind that this tray is used to help route air from the fans through the areas that need cooled, so you don't want to cut away too much plastic. 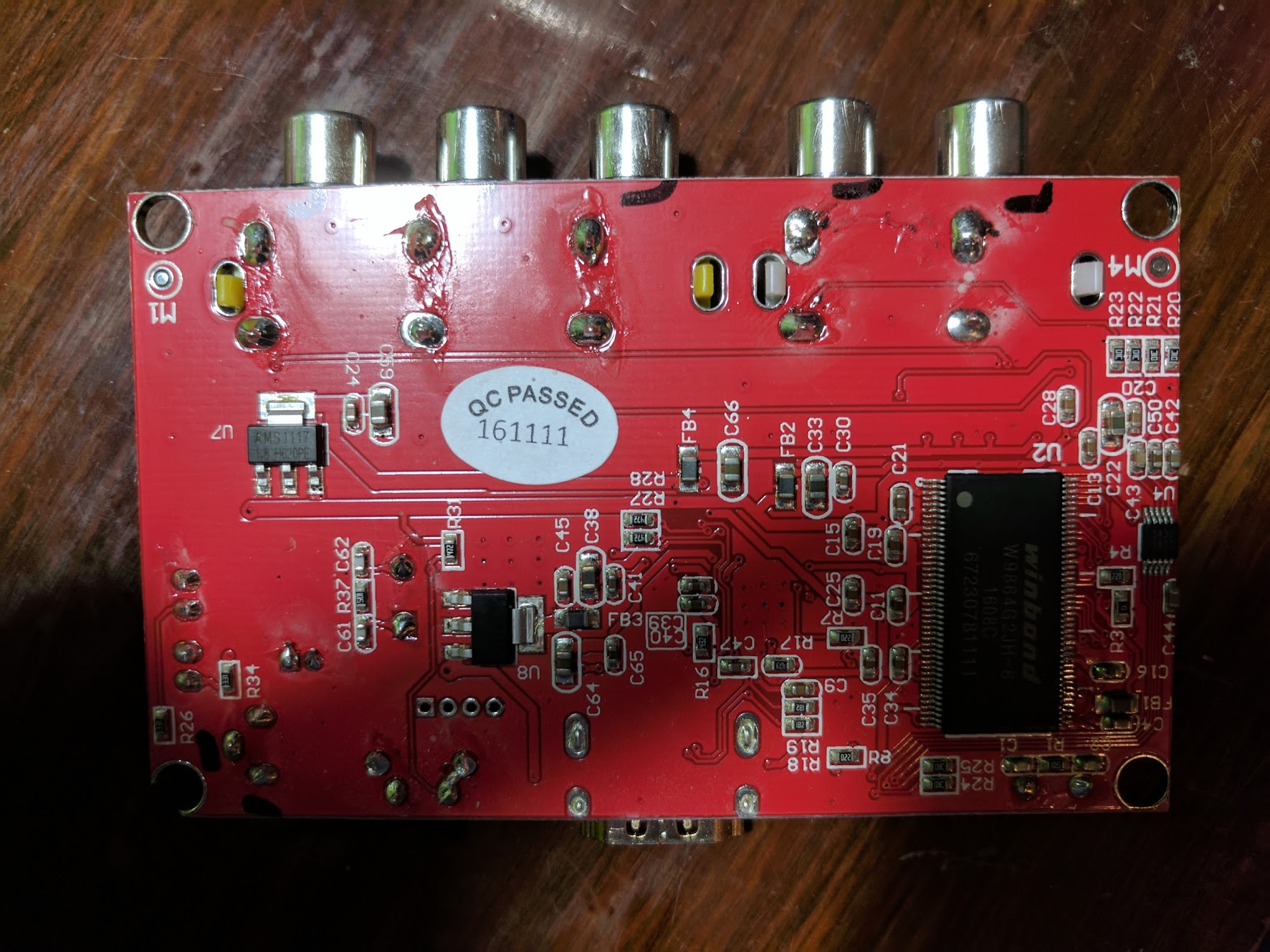 First take apart the converter box. Mine had four screws underneath the four rubber feet. You should now have access to the board that was inside of the casing. You should then be able to locate the solder points for the component cable jacks, and the DC power input port.

You'll want to use a multimeter to determine which solder points correspond to which parts of the jack. The outer metal on the jack corresponds to the negative wires on the Xbox. In my case the center of the power jack is positive. I drew my findings onto the board with a permanent marker so that I wouldn't forget.

With the converter I bought I also had to remove the resolution toggle button. To make the board more compact you may even want to remove the component and power jacks entirely.

Connecting the Xbox to the component converter 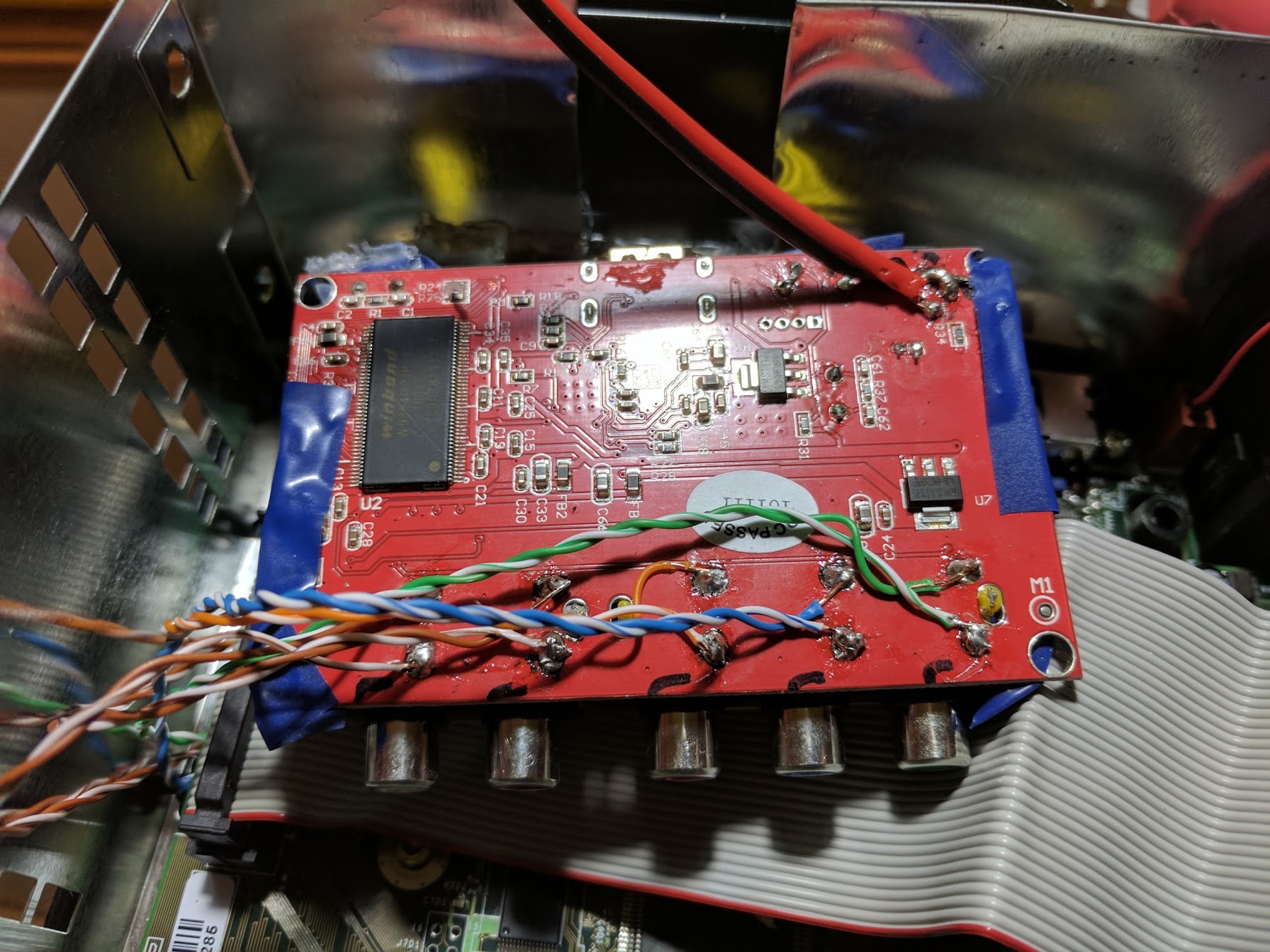 Now that you have prepared the Xbox and the component converter you can connect them together. This is pretty straightforward. All you have to do is solder the ten wires from the AV port to the corresponding solder points on the converter. You will also need to connect the two power wires to power the converter.

Make your wires as short as possible. I hot glued my converter box to the console so that the HDMI port was sticking out the back. You will also want to cover the component converter board with electrical tape to prevent it from making electrical contact with any part of the Xbox. 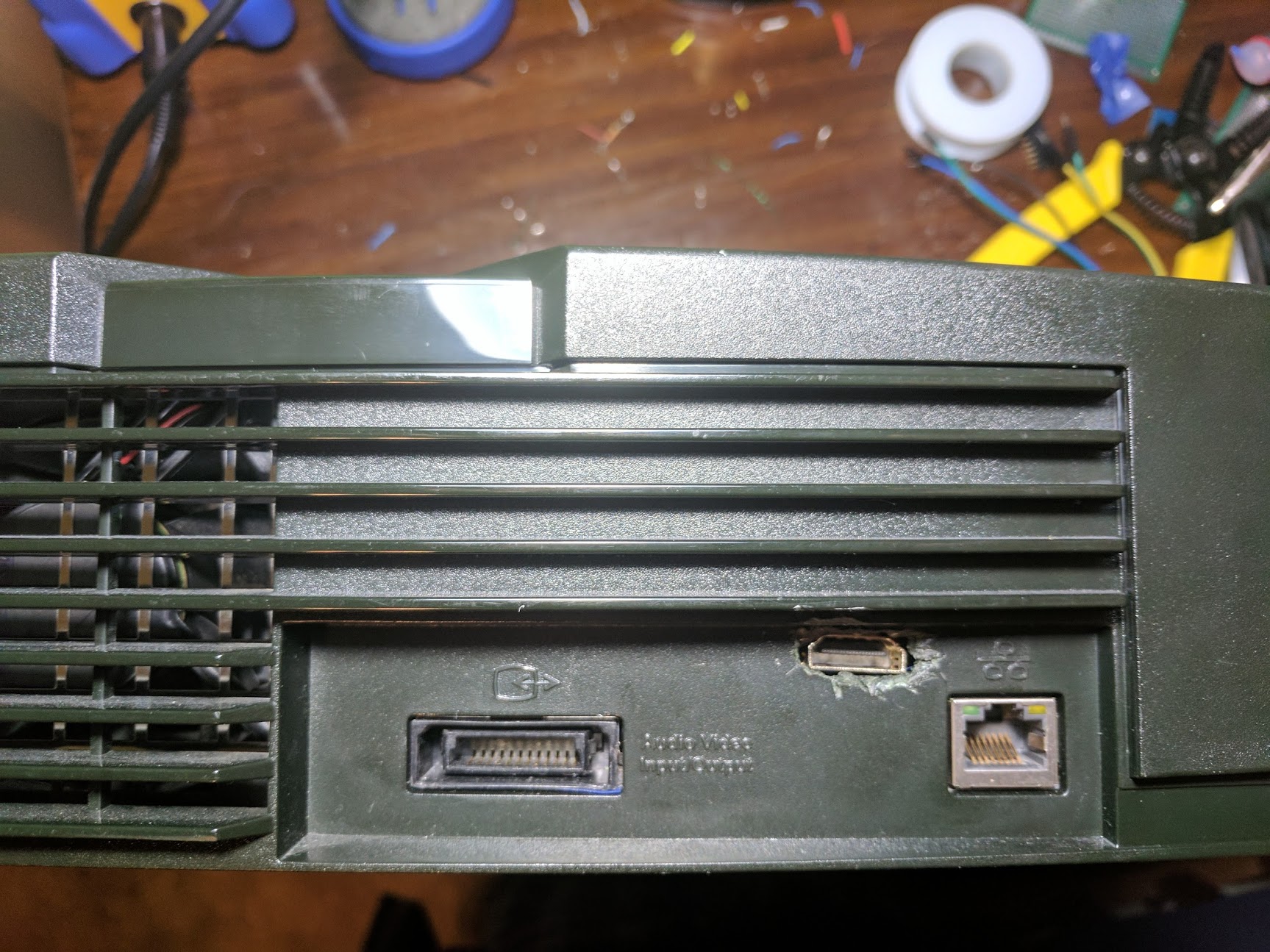 You should now be able to power up your Xbox and connect it directly to an HDTV through HDMI. Surprisingly, I was able to get better image quality through the internal component cable wiring than through cheap aftermarket component cables, but you may get different results depending on how you wired everything. Additionally, I didn't notice any additional latency going through the HDMI to component converter.

This mod is a great way to make the original Xbox a more modern console that is more convenient to connect to modern HDTVs. For around $25, and a few hours of time, you should be able to add an HDMI port to your original Xbox.

I also own a Xenon Xbox 360, which was the first revision that came without an HDMI port. I plan on doing a similar mod to my Xbox 360, but maybe using a VGA to HDMI converter instead.

I posted this project to Reddit on /r/OriginalXbox, and /r/DIY, and got quite a few comments. I've collected many of those comments to create this FAQ section.

I just did this with that exact converter. You don't need to wire the component negatives, and you can pull 5v (for converter power) from one of the red wires at the connector leading to the power supply, and ground to one of the grounding rings at the mount screws.

Friend where did u find the exact converter?

Can you just wire a hdmi cable in directly?

No, there needs to be some sort of converter in between.

Hi Trevor, you mentioned the grounds for the components don't need connecting do you mind elaborating? iwas looking at mking a component break out box using a regular AV cable (red, white, yellow) desoldering the pins and adding the cables for the components and the pins to activate advanced AV pack. Would i need to ground the 3 (red, green, blue) on the connector? Any help would be much appreciated.

great Articale btw William, Ill be trying this when i have a TV with HDMI. Thank you for a well written article and pictures 🙂

Adding an HDMI port to the PS2 fat - William Quade

Is it not possible to simply remove the current output and mount the hdmi port in its place?

Yes, instead of cutting the hole in the case the stock video output port could be removed.

I just did this mod but the picture is very fuzzy and it sometimes goes completely black. Any ideas?

It probably has to do with your wiring. Make sure they're as short as possible

Just for clarification, the converter you've linked that you used internally can work just fine externally? I purchased a converter and it wasn't displaying on the tv. Looking for a quick easy fix.

Yeah, it works externally as well, you'll just need some original Xbox component video cables. I actually used mine externally for a while before I made it internal like in this post.

Thanks now i can use the Xbox

Hi I have this https://www.amazon.com/Portta-Extractor-Converter-Digital-Support/dp/B00HIW7TZC can you help me figure out where I need to wire it

Is that just an HDMI audio extractor? I'm not sure what you're trying to do with that.

It's a HDMI to av converter