In my last post I covered the various performance modifications I have done to my NB Miata during my first six months of ownership. I didn't do anything too crazy, but still managed to improve the experience of my car. Things like an exhaust and intake for sound, along with engine mounts, tires, and chassis bracing to improve the driving feel of the car.

This post covers NB Miata cosmetic mods that I have done to my car during the first six months of ownership. I explain what I did, why I did it, and what my experiences were with various different mods. 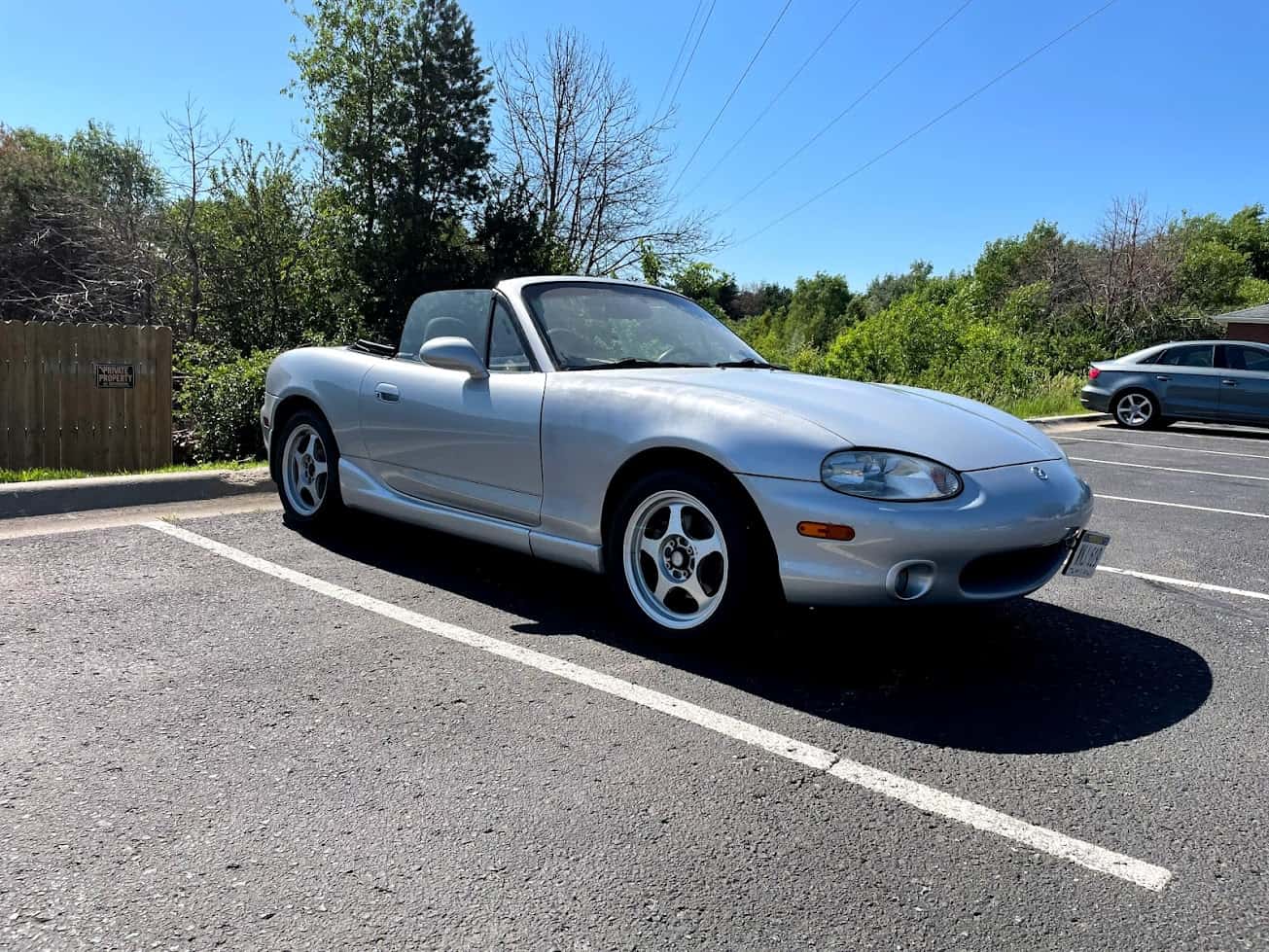 When I purchased my Miata the passenger side fender was dented in at the front. It wasn't that big of a deal, but I wanted to get it fixed. I ended up just purchasing a new replacement fender for pretty cheap instead of trying to bend out that dent.

One of the issues was that the color coat didn't quite match the color of the original paint. Both the color and the metallic texture just aren't quite the same. I believe that one of the issues is that the rattle can paint just wasn't going on thick enough to replicate the OEM look. The difference in color and finish is really obvious under certain lighting conditions, especially close up. Under other lighting conditions from a little ways away the fender paint matches pretty well.

The other issue was that the original Miata paint has a slightly different texture on the lower part of the panels on the sides. It's a more rubbery type of paint to help prevent rock chips. This realistically isn't something that most people are going to notice.

Overall I was happy with the results. I planned to wrap the car eventually so the exact color match wasn't critical, I was mostly just aiming for something that looked decent, and wasn't dented or anything. The fitment was perfect, and it was super easy to replace the fender. I didn't even need to remove the headlights and front bumper like some instructions suggest. 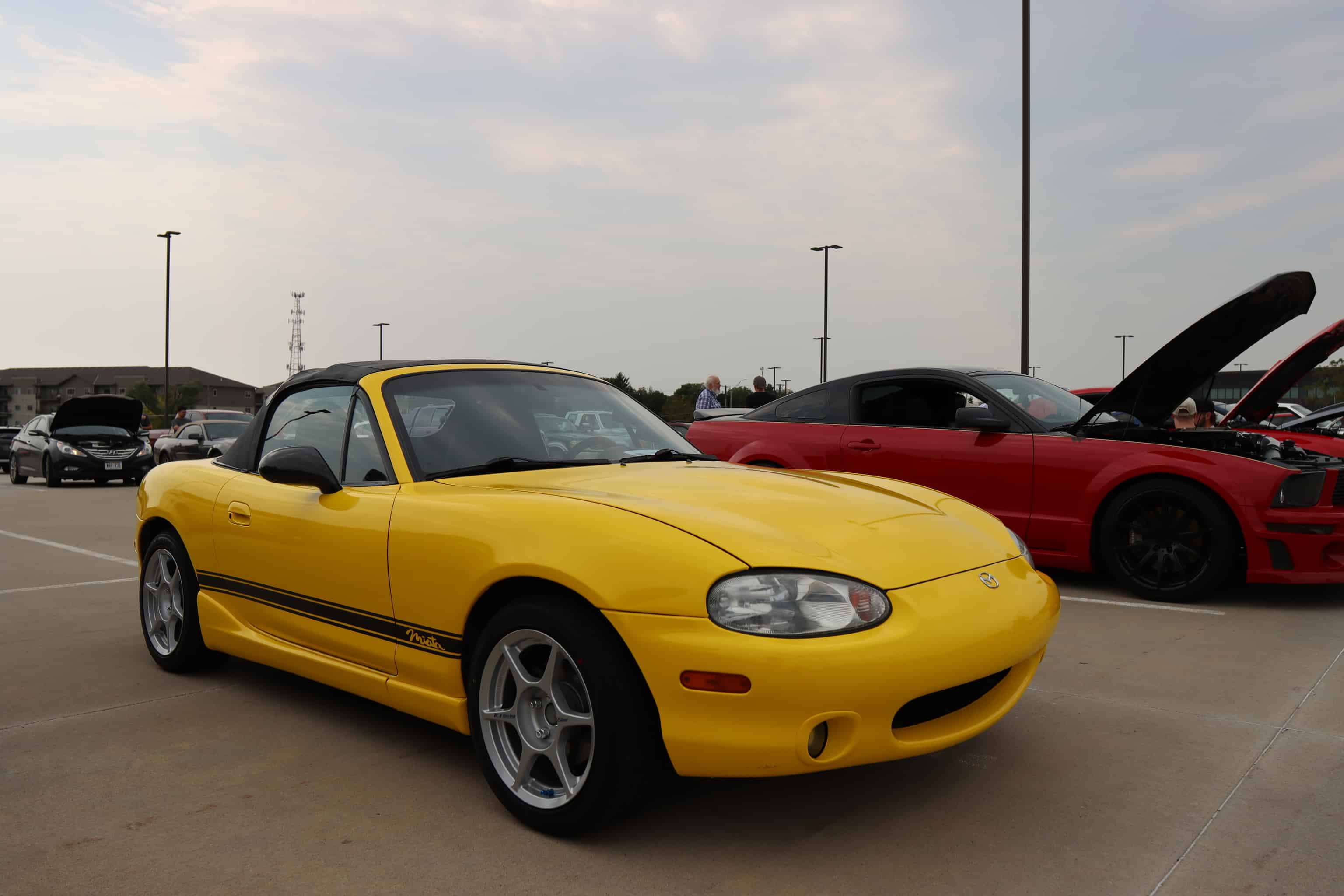 When I purchased my Miata I wasn't really looking for one color in particular, I was more interested in the overall condition and price of the car. There also weren't that many options for cars nearby. So it sort of made sense that I ended up with the most common NB color, silver. I did like the color, but I sort of wanted something more interesting.

There are several ways to change the color of a car. I chose to go with wrap, and decided I wanted to try wrapping it myself.

Choosing a color was difficult, there are just so many wrap color options. I pretty much immediately ruled out standard colors like shades of white, black, silver, and gray, those are boring and on most cars on the road today. Red was also ruled out (it's probably the most popular color here after the monotone colors). I thought about blues, yellows, and oranges, but eventually settled on a sort of medium yellow.

The exact color I went with was the G15 shade of 3M 2080 series wrap. I thought the yellow suited the Miata very well, and is a very unique and interesting color. I hadn't seen a yellow Miata in person, but liked similar colors on certain cars like the Honda S2000, and Civic Type R.

Wrapping the Miata was surprisingly easy to do. I learned a lot while doing it, it's definitely the sort of thing where the more you do it the better you get. There are some spots on my wrap that aren't perfect, but it's good enough for me. I may end up redoing some parts in the future, but for now I'm happy enough with the results. I will say that it's something that would have been much easier with another person to help. Things like the bumpers require a lot of stretching that a second set of hands would make significantly easier.

From a distance the wrap looks perfect, and closer up there aren't too many bad looking spots. The color really does look good on the car. I added some black Miata font text stripes on the sides where the factory paint changes textures to sort of cover up that line. I'm also doing some other black/carbon fiber accents that should contrast well with the yellow (things like the mirrors which were super hard to properly wrap).

I will say one big drawback with yellow is how easily it shows things like bugs and dirt. I'm constantly having to wipe off bugs in the summer since they are clearly visible. Certain bugs also seem to be strangely attracted to the color of the wrap, so sometimes when it's parked I'll see an unusually high number of bugs crawling around on the wrap. 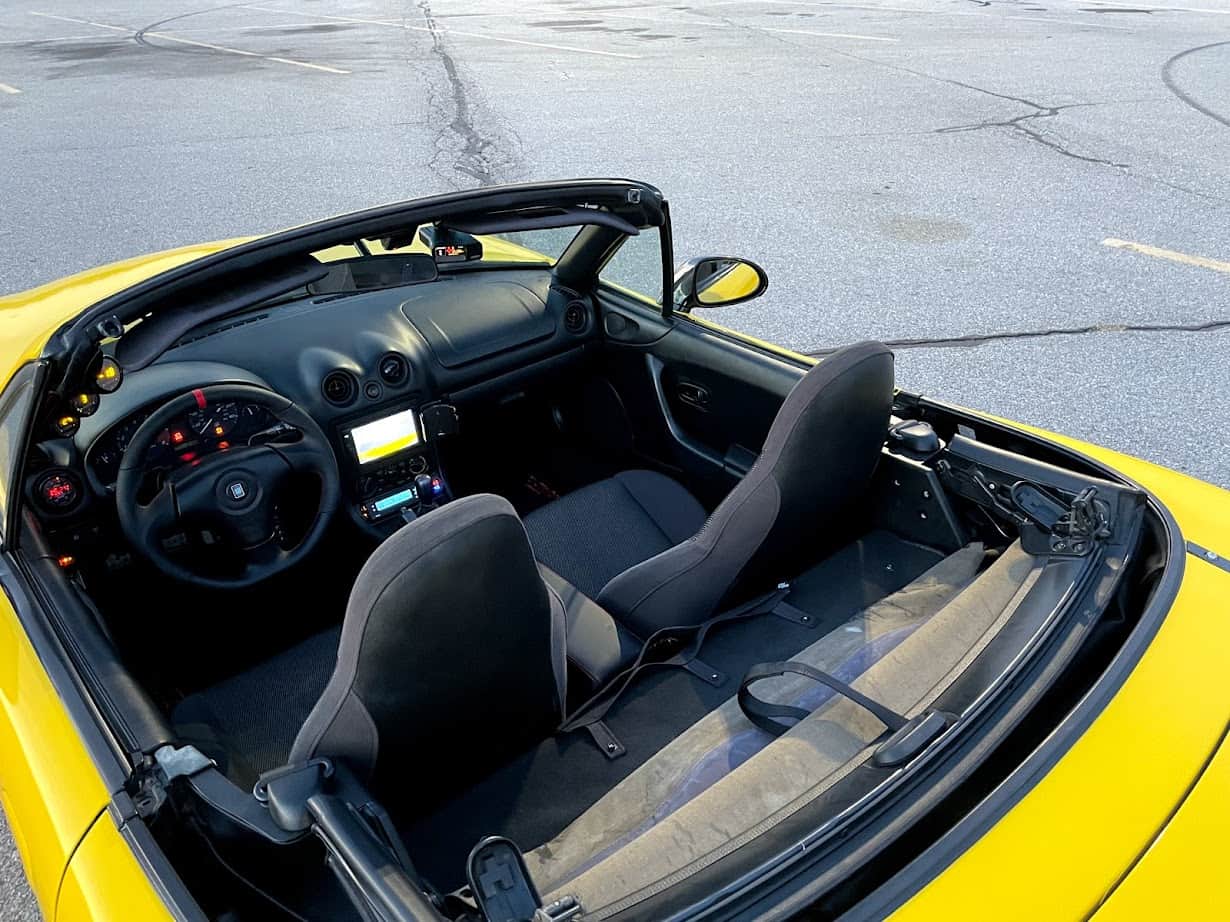 I made some improvements to the interior of my Miata that I thought were worth mentioning. These are in no particular order. I ended up going with a black/gray/red color scheme on the interior. These colors sort of go well with pretty much any exterior color, so if I end up removing my wrap or changing the color down the road I can leave the interior as is (if I used yellow accents in the interior it wouldn't work so well if I went back to silver).

One of the things I didn't like about my Miata was that the oil pressure and coolant temperature gauges in the gauge cluster aren't very useful. The stock oil pressure gauge is essentially just an on-off sort of gauge and doesn't move once you start the car. The stock coolant temperature gauge only really has three states: warming up, operating temperature, and nearly overheating. I wanted to have a better idea of the current state of my engine so that I can react if things go wrong and potentially save my engine.

So instead of doing that I ended up installing some aftermarket gauges. They will provide me with even more information and don't require touching the stock gauges. My setup consists of three gauges on the A pillar (all from Innovate Motorsports), along with a single gauge in the driver side vent (from AEM).

The topmost gauge is a combination vacuum/boost gauge and also a shift light (I didn't hook up the shift light portion though, at least not yet). My Miata isn't boosted so it is really just a vacuum gauge, but it's still interesting information that may be useful for diagnosing issues, and can help me tune the car in the future.

The middle gauge is a combination oil temperature and oil pressure gauge. This is arguably the most important gauge. I installed the sensors on an oil filter sandwich plate. These gauges tell me a lot about my car. I can see when the oil has warmed up by seeing the pressure decrease, and the temperature increase. When the temperature starts getting warmer I can know to slow down a little bit to cool off the oil a bit. I can also keep an eye out for a loss in oil pressure so that I can shut off the engine.

In the driver's side air vent I installed an AEM AFR gauge. This gauge can tell me how rich or how lean my car is running, and provides an output that I can use with an aftermarket ECU down the road. I was actually able to use this gauge to notice that my car was running unusually rich. Replacing my MAF sensor with a replacement used sensor fixed this issue and got my AFR back to what it should be.

Overall all of the gauges I installed have been very useful and interesting. 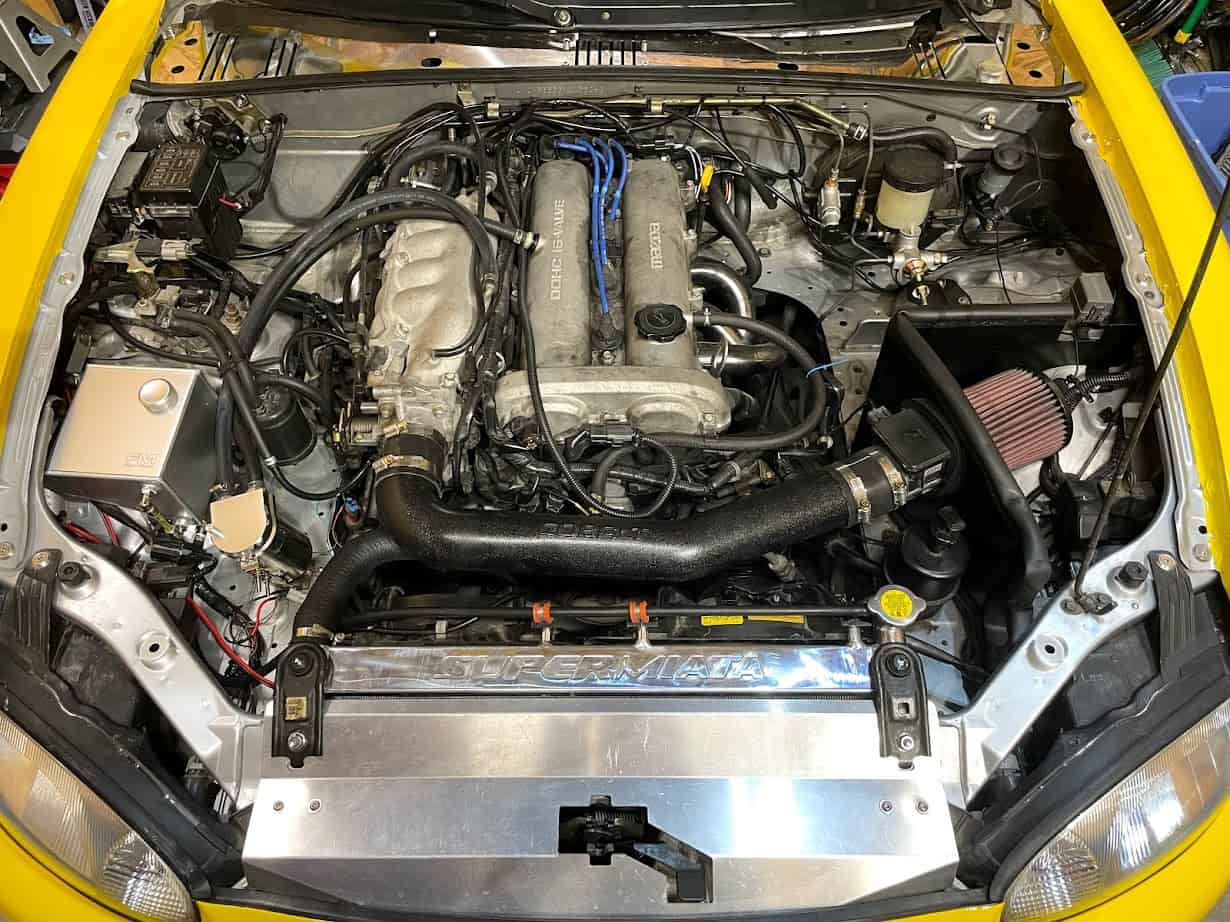