In order to save a little bit of money, maximizing profits, it’s common for companies to use cheap thermal interface material. In the case of the PS3, the thermal paste that Sony used for the Cell processor and the RSX graphics processor doesn’t age very well.

I recently bought an original 60GB PlayStation 3, with the CECHA01 model number. In the past I have used newer PS3s, and they were all reasonably quiet, so I was surprised at what I heard not long after turning on my console. The fan went to full speed, and never went back down to a reasonable level.

I immediately took apart my PS3, and replaced the decade old thermal paste on top of the two processors. After replacing the thermal paste the PS3 would remain quiet for longer, but would still always end up reaching 100% fan speed.

After searching for a solution, I read that delidding the processors to replace the thermal paste underneath the heat spreaders was the solution. That’s what this post is about.

Let’s start with what I consider the easier chip to delid, the RSX graphics processor. The chip is circled in the image above. If you look around the edges of the metal heat spreader you can see that there are four pillars, one at each corner. In between those pillars are gaps.

To remove the IHS from the RSX:

I found a video that follows these same steps. He used a butter knife to pry off the chip really quickly. I was surprised to find out that it worked. I’d recommend going slower though. I personally used a metal spudger from iFixit. I used the bigger rounded curved tool pictured on the left of the image below. It’s safest to use something that’s not sharp, preferably plastic, so that you are less likely to scratch the chip.

I was really scared to remove the IHS from the Cell processor. When I did it I had just finished flashing custom firmware on the system, I didn’t want to break the chip and have to start fresh with a new PS3. The Cell processor is much harder to remove because there is glue all the way around the chip that you have to cut.

At one point there was a tool made specifically for cutting the glue around the Cell processor, but it’s not being made anymore. There are many different ways to cut the glue. Razor blades are really common, but their sharpness makes it really easy to damage the processor.

One of the more interesting methods I found was someone using a fishing line. He heated up the IHS, cut a corner of glue away, and then used fishing line to saw away the rest of the glue. In theory this should work, but the fishing line I bought was way too thick to get into where I made the cut.

I ended up using a painting knife to successfully cut the glue. They were recommended in a forum, but I was skeptical. I was surprised at how thin the knives were when they arrived in the mail. They are very thin, and not sharp at all, perfect for what I needed them to do.

Here’s what I did to remove the IHS from the Cell:

The key with the Cell processor is to go really slowly, and be careful. There’s a lot that can go wrong, many consoles have been destroyed while removing the processor’s IHS. I was able to successfully remove the IHS on my first try.

Painting knives worked extremely well. I was able to get a feel for the amount of pressure needed to cut the glue. The hardest part was removing the glue on the sides where there were a lot of components on the board. That’s where I found the “4” knife useful, it was long enough to reach all the way across a side of the processor.

Now that you’ve removed the heat spreaders from the Cell processor, and the RSX graphics processor, it’s time to clean them, and put your PS3 back together.

Cleaning the heat spreaders, and processors

First you’ll want to clean the heat spreaders, and the processors. I used a combination of toilet paper, an iFixit plastic spudger, and isopropyl alcohol. Use the spudger to break away any suck pieces of thermal paste, and the remaining glue. Isopropyl alcohol, and toilet paper will get rid of any of the remaining thermal paste. Make sure that you don’t damage the processors, or any of the small components on them.

Applying thermal paste to the processors

Once you have cleaned the processors, you can apply thermal paste to them. It doesn’t really matter what paste you use, I just used some that I already had. You’ll want to apply some to the middle of the processors, and on all four of the memory chips. Then you’ll want to spread the paste over the surfaces using something plastic, like an old credit card. As long as you aren’t using conductive thermal paste you don’t have to worry about getting the paste on the chips. In general it is better to have too much thermal paste than to have not enough. You should try to have some paste overflowing the edges of the center surfaces (around the edges of the processor die).

The image above was taken right after I had removed the Cell’s IHS. I still needed to do some cleaning up.

After delidding the processors, and putting everything back together, my PS3 ran quite a bit quieter. It was still louder than slim consoles, but it’s much better than before. While playing Uncharted, the fans ran in the 50-60% range, instead of the near maximum speed that they ran before. More importantly, the fans will actually go down in speed when the game is less demanding, and when not playing a game.

I recommend that everyone replaces the thermal paste underneath their heatsinks on their gaming consoles once your warranty expires. It’s really easy to do, and will keep your console alive for longer. I find it harder to recommend delidding your processors. It’s a very risky process. In the case of an old PS3 that I bought for $50, there wasn’t a whole lot to lose. Fortunately both the PS4 and the Xbox One don’t use heat spreaders, so they don’t need delidding.

Terrific guide! Wish something this clearly step-by-step was around when I delidded my PS3. You deserve a lot of Internet hits with this.

I just wanted to thank you for helping me bring my 60 gig CECHA01 PS3 back to life! I originally just replaced the thermal paste on top of the heat spreaders. This worked but only for a month or so. I knew then that I had to get under the IHS for the CPU an GPU but I couldn’t get myself to do it. It was a combination of a couple youtube videos by NSC modz and your article here that helped me find the courage to de-lid.. I used NSC mods method for removing the IHS over the GPU… Read more »

Was hoping for your opinion. I did the procedure for the Cell Processor and I believe I scratched the solder mask, I’m not sure how familiar you are with this so hopefully you tell me how deep it looks. It doesn’t look deep to me and seems the copper was spared but someone with experience will probably be able to tell right away I think. It’s in the bottom left corner: https://goo.gl/photos/Yispx5o9n1SuzVJz5 https://goo.gl/photos/V8TSSqv2Udu78rMw6 I also knicked the NEZ N8 thing in the process, but I think that was just that casing and there wasn’t any harm to the internals of… Read more »

I don’t think that scratch is deep enough to cause any actual damage to the processor. From my understanding the scratch would need to be deep enough to cut the copper underneath for any processor damage.

As for the NEZ N8 thing, I did a Google search and it turns out it’s a capacitor. It’s probably fine, but is replaceable.

How can I know if I messed this up? I did this fix, but when I hooked it up to the tv, the PS3 turns on, but there is nothing on the screen. I changed the HDMI cable, i turned both the console and the t.v. off and on, and I even did the trick where you press the on button for a few seconds and it reverts to the most basic video settings, but i still get no image.
What can I do?

If it doesn’t work you may have damaged one of the chips. Did you notice any damage to the top of the processor when you took the lids off?

No, the chips are pristine, not a single problem with them. Should I try another tv?

Did it work with the TV before you removed them?

Yes, it worked with this tv before I attempted this fix.

Something must have gotten damaged in the process then.

Turn on the console, keep holding the power button until you hear it beep again, this will reset the video output.

Thermal paste works, just make sure it doesn’t fall of when putting everything back together.

Could you use a plastic spudger to remove the cpu cell?

Those are probably too thick to work, the cutter needs to be extremely thin. A guitar pick might work though.

What temperature should I run the heat gun over the IHS on the chips to assist with cutting the glue?

You just don’t want the solder to melt, keeping it under 300 F should be plenty safe.

Hi. Do you perhaps know the value /description of this component in the attached pic?My one seemed to come off while I was attempting to remove the heat sink.

How bad is a scratch like this in the lower green space of the cpu?
I had ylod before this and it hasn’t changed after.
The rate at which it turns yellow hasn’t changed so I’m assuming the system was unaffected by the scratch…

I think it’s probably fine. I don’t think you damaged any traces, just scraped off some solder mask.

Thanks for the immediate feedback!
here’s another angle for clarification (sorry my devices take crabby photos). Was wondering how those dimple marks relate to the plausible relay of solder balls beneath, maybe those are just part of one similar base signal coming from what you called the solder mask and nothing too concerning… I hope lol
Either way I’ve basically given up on the system until I can properly diagnose the issue or get my hands on some tantalum capacitors.

I… think I’m screwed, aren’t I? When delidding the RSX lid, I clearly used too much force the first time: 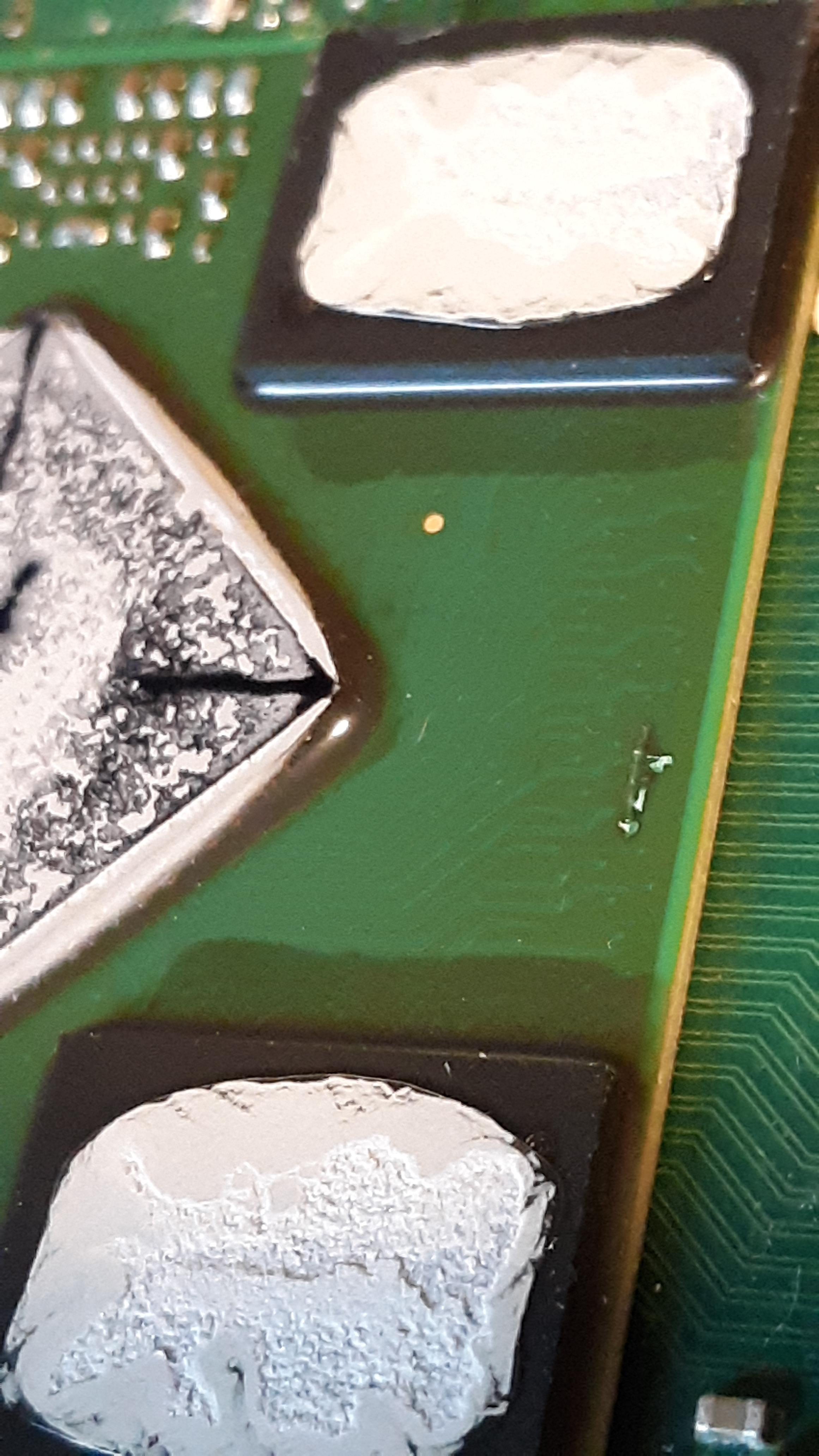 I guess my whole PS3 is now borked? Welp.

It might still work, it’s possible to scratch just the solder mask without damaging any traces.